Home The Blog The Kaleidescopic Opal

Whenever we dare to fully embody our own magnificence, there will always be someone who declares we are simply too much.

Most days, thank goodness, we won’t believe them, but for those rare days when we are tempted to do just that, we can look to the opal to remind us that being misunderstood by some does nothing at all to diminish our own inherent greatness.

Remarkably kaleidoscopic, opals have been said to contain all the radiance of rubies, amethysts, and emeralds in one incomparable gemstone. Ancient Romans regarded these prismatics gemstones as second only to the emerald in brilliance and beauty, and they were prized by dignitaries and rulers as talismans of benevolent fortune. Yet in a fascinating reversal of this lore, an opal once nearly cost an ancient Roman statesman his life. 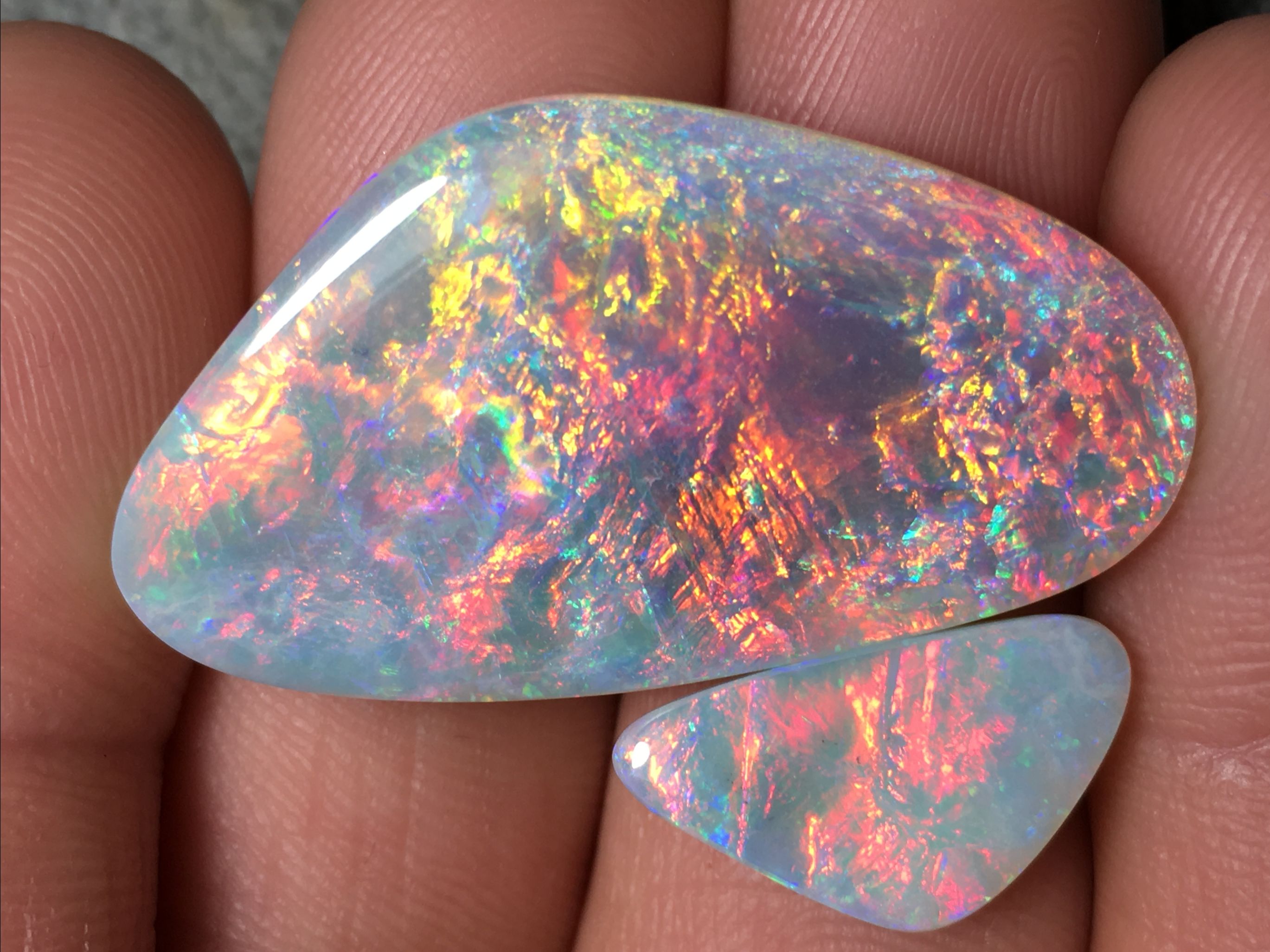 The year was 41 BCE, and Marcus Antonius was on the hunt for a gift so extraordinary it would impress the woman he adored—Cleopatra, the Queen of the Nile. He thought his search ended when he saw a sumptuous opal ring belonging to Nonius, a wealthy Roman senator, but Nonius vehemently disagreed with him. The refusal to sell it enraged Marcus Antonius to the point that Marcus Antonius ordered the death of Nonius and the confiscation of all his property. But Nonius left his home, fled his country, and took his extraordinary opal into self-imposed exile with him.

If ever there were a gemstone worth giving up the comforts of the familiar, we see why Nonius thought his opal was it. A thoroughly unique gem, opals are said to enhance the literal and metaphorical vision of those who wear them while easing inhibitions and encouraging spontaneity. They were brought to earth by bolts of lightning—according to the tales told in Muhammed’s time and country—and it is this energetic origin which cause them to forever flash with shimmers of heaven. 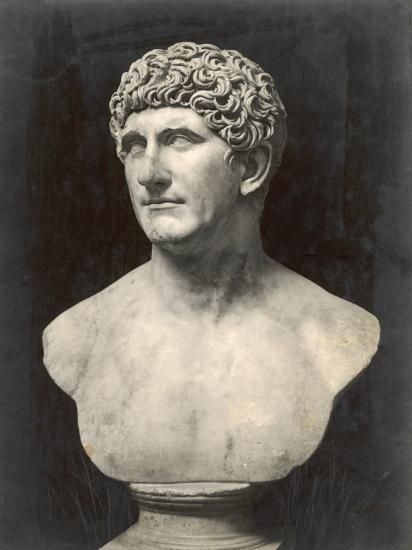 A marble bust of Marcus Antonius

Though there are no clear records of when the first opal was discovered, experts believe they were mined in Slovakia and the Czech Republic as early as 250 BCE. A non-crystalline mineral, opal is comprised of sub-microscopic spheres of silicon dioxide which have bonded together with silica and water. It is the unique arrangement of these spheres that is responsible for the play of color for which opals are famous. It is also this singular composition which helped ignite later rumors that opal was an unlucky stone.

Lapidaries unused to working with such deliciously delicate gemstones often vented their frustration at yet another opal shattered by their inexperienced ministrations with pejoratives against these lustrous jewels. Adding fuel to the fire were those who believed the opal worn by Lady Hermione in Sir Walter Scott’s Anne of Geierstein was both responsible for the tragedies in the novel and representative of all opals in general. And jealousy played a role in the falsehoods, too. Envious of the opal’s popularity at the turn of the 19th century, diamond merchants did all they could to dissuade anyone from purchasing opals with invented tales of misfortune befalling those who wore them. 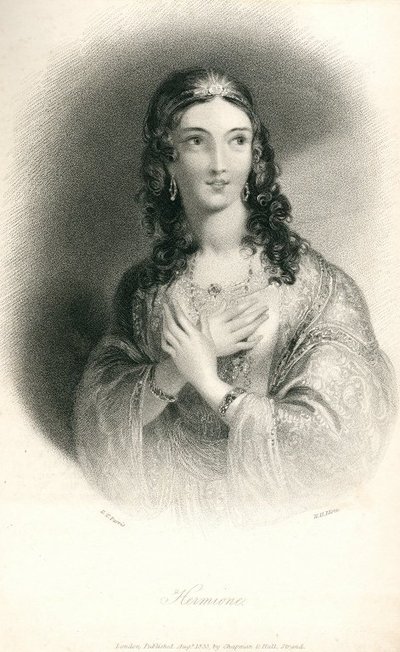 Engraved portrait by W.H. Mote after E.T. Parris of a character from Scott's novel Anne of Geierstein

It was Queen Victoria herself who was largely responsible for a resurgence of admiration for these transcendent gemstones. Uninterested in the aspersions cast by those who insisted on misunderstanding the opal’s mystery, she gifted opal adornments to her friends and family with abandon. Following the royal lead, Victorian artisans began to feature opals more prominently in their creations, and they were worn with pride once again. 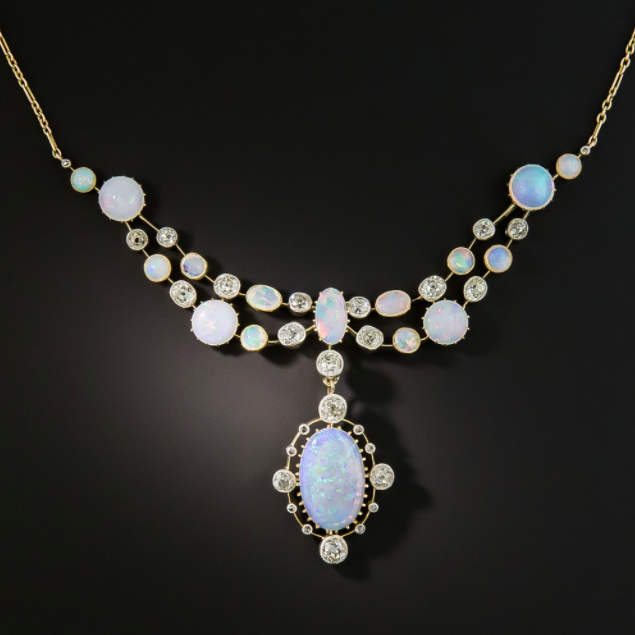 Especially auspicious for those born in October, these captivating gems are believed to enliven wearers with an extra portion of creative vitality and assist in reaching one’s full potential. Experts at subverting expectations, opals inspire resiliency in the face of obstacles and encourage innovative thinking for all of life’s challenges. It is these attributes which make it the perfect stone for celebrating both the 14th and 34th anniversaries—milestones impossible to reach without the ability to adapt and appreciate all the complexities of life. Nearly as enigmatic as the humans who wear them, every single extraordinary opal is a tribute to the dynamic expression of our full humanity.