Genesis of all that lives, Ushas—Goddess of dawn—traverses the sky in a golden chariot...

Dispelling darkness, she brings the daily hope of morning into the world and the hearts of all who breathe. In Hindu lore, Ushas is mother of Gods, the source of vitality, the one who sees all and remains serene. Bringing to light what has been hidden, she empowers authentic existence and genuine community. She is joy embodied and delight personified. Bedecked with jewels, she shimmers and sparkles within and without. And though there is no certain record of the gemstones with which she adorns herself, citrine seems the perfect gem for such a Goddess as Ushas.

Ushas on her chariot pulled by seven cows

A vivacious variety of quartz, citrine owes its charismatic coloring to concentrations of iron and its lyrical name to citron—the French word for lemon. Dancing along the entire spectrum of yellows from cornsilk to canary to amber, this radiant gemstone has been worn as adornment since 300 BCE. Though most frequently found in Madagascar, Myanmar, and Brazil, this tantalizing gem has enjoyed devotees throughout the world since its discovery.

In ancient China, citrine was known as a gemstone of success and prized for its ability to enlighten and expand the minds of those who wore it. And in Hindu mythology, it was believed to be the gemological representation of Brihaspati—counselor to the gods and the deity of wisdom itself. In slightly more recent years, citrine deposits discovered in the Cairngorm Mountains of Scotland in the 16th century delighted the Scottish Highlanders who used the gem as adornment in the daggers and kilt pins throughout the 16th and 17th centuries. In the aftermath of the 1745 Jacobite rebellion, though, it was widely spurned throughout the United Kingdom until it was brought back to European fashion in all its glory when Queen Victoria became enamored of its beaming brilliance. And Americans simply could not get enough of this sunny gemstone during the 1920s and 30s—gifting our world today with sensational pieces of wearable Art Deco history. 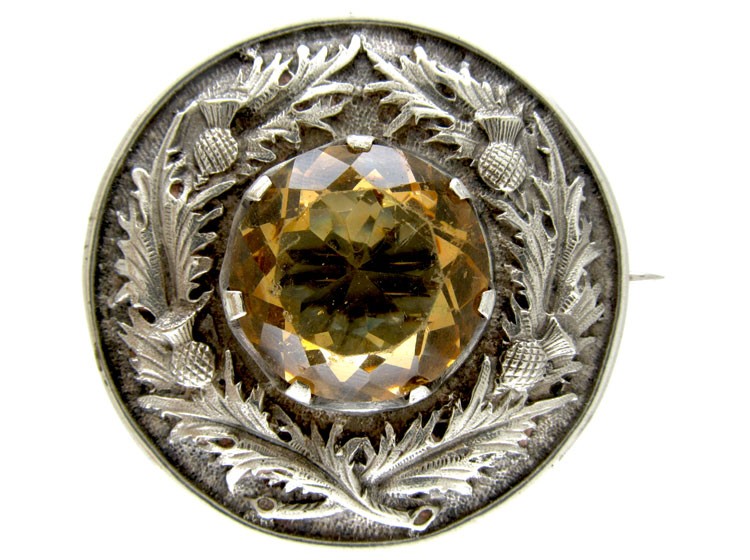 Beloved for its luminous appearance as well as its metaphysical properties, citrine seems eager to grant its favors to all who encounter it—offering a heartening accompaniment to any endeavor or ensemble. Believed to dissipate and transmute negative energies, citrine is said to warm the soul as the sun warms the body. Known as the Merchant’s Stone, it is believed to bestow abundance and attract all manner of wealth to those who wear it. In its luminous glow, one’s own inner light is free to find its shine, and it is credited with sparking imagination, cultivating creativity, and empowering artistry. Lustrous gemstone of the Solar Plexus Chakra, citrine is also believed to offer an expansion of self-confidence and authentic authority to all who adorn themselves with it.

Particularly auspicious for those born in November, stunning citrine offers all who wear it a gleam of rejuvenating autumn sunshine even as the hours of daylight decrease on their way to winter. With a reputation for boosting harmony in relationships and clarifying in one’s own mind what brings fulfillment, it’s no wonder citrine is the anniversary gemstone for the 13 and 17th anniversaries. As dynamic in its essence as the one who chooses to wear this vibrant gemstone, citrine invites joyous exploration in the adventure of living. 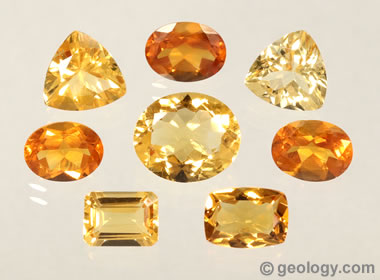 A collection of Citrines showing the variety of colors. Spotted on Geology.com

Like the presence of Ushas wherever she goes, this lustrous gem is an invitation to bliss, to a rapturous enjoyment of all the glories of existence. Incorporated into any piece of jewelry and gifted to another or yourself, citrine is happiness made manifest. Perhaps a gift from the Goddess herself, it lights up each moment it is worn with a divine beauty perfect for momentous occasions or the ordinary wonder of every day.